Once we were playing an outdoor concert at some college in North Virginia. It was a moment in time; this was where our lead guitarist Gary Uri got his song “Virginia on a Sunday.” I had a pretty girl on my arm and I was sure we’d be the best band on the two day venue. Best of all, we were up last so the possibility existed we could own the gig if we were up to the job.

A guy saw me tuning up, and came over claiming my beloved Ampeg Violin bass was stolen. He was able to convince me his claim was genuine.

I told him sadly I didn't want stolen gear but I needed an ax. He handed me a very souped up Fender Jazz Bass. I was sad but felt I'd done the right thing.

An hour later we played the last formal show of the two day concert. It was a dream gig; we sounded great and the crowd loved us. Just before I went back on stage for an all bands jam that cat came back and handed me the Ampeg. He said the Jazz Bass had sounded good and I'd been straight with him so he wanted me to have the Ampeg. That was a pretty cool guy.

The funny thing as it turned out; I ended up jamming with a band called Howdy Doody for the last set of the day. I ended playing their bass man's Ampeg Dan Armstrong Plexiglas bass like Bill Wyman had been using. And heavy as it was, did I feel cool playing that thing! Unlike the Howdy Doody boys I wasn’t naked though; I never did like cool aid!

my original music made J Haley "want to barf"

it reminds me of the story of how i came into my '67 GUILD STARFIRE bass. ..can't remember if i've ever shared it here.

a few yrs back I was playing bass w Django's Tiger, a gypsy jazz trio. i had some dealings w this guy who bought some equip from me and I was by his place. after a bit he mischievously told me he had something to show me. he led me to a back room and pulled out a bigassed old funky Guild hardcase that i knew could only be housing a STARFIRE. and man-o, I LOVE these old STARFIRES!!!!

"Is that what I think it is?" i asked as he was getting ready to open the case.

"Well, if you think it's an old STARFIRE, you'd be right".

and there it was... a beautiful example of a red 1967 STARFIRE II bass.... same yr, model, and color of one I had way back in the day when I was still living in NYC. One of many that "got away" and one of many i regretted selling and i still pined for.

"wow, do you play it much?" (i could tell from the dust on the case he did not) he confessed he never played it and i asked him if he'd consider selling it to me.

"nah. I don't think I'd ever sell it but you're welcome to borrow it"

now, keep in mind we were not much more than just passing acquaintances....and here he is offering to let take this valuable vintage axe home w me! well, of course i took him up on it. i got it home, whipped it out, and relived some old fond memories of back in the day when i still had my old one. I called him up and told him to name a price, i NEED this bass. And again he told me he'd never sell it, but no worries, hold on to it for awhile.

fast fwd a few days later, and Django's Tiger is playing a gig at a place w horrible acoustics. I'm playing upright bass in this deal cos it's the right tool for the job playing that stuff. Sounds right...looks right. But I have a plan.

Totally premeditatin' mofo that I am....i planned on bringing the STARFIRE and inviting this guy to the gig. We're playing the first set...he's not there yet, and the acoustics are even worse than i remember in this room. i'm working my butt off on the big bass and it sounds like total dog poo.

then as we're finishing a song, i see him and his wife walking up outside. i grab the STARFIRE and I'm playing it when he walks in..... I knew THIS is my chance, I need to blow this guy away and THAT is gonna convince him to sell it to me! now, we all know that feeling when you're playing a good instrument, and it feels good, and you're getting the "gold tone", well....you just feel like you can do no wrong. after getting on that GUILD after the upright....it was go time and the bass and i were "in the zone'!

He and his wife walk in, and his face lights up in a big, goofy ear to ear grin. he's bopping all the way as they're being led to their table. I was pretty sure I had it right there. We played a few more songs w me on his STARFIRE and he's clearly digging it. I go over on break and he says "wow, you sure make that old bass sound good! Do you still want to buy it?"

i explained the bass was worth much more and he said that's OK, he wanted me to have it. we shook hands and i said that in the very unlikely case of me ever selling it, that anything i got above the $900 we'd split or it would just be his.....he laughed and said, "Mark, after you pay me...the bass is your's, don't worry about it".

these basses usually fetch around $1800 to $2500 depending on cond. needless to say, I have NO plans to sell it and now after recently putting flatwounds on it, it's become Sarah's favorite bass to play.....this after she was most uncertain that she and the STARFIRE would ever become friends! So, there's no way I'm about to do anything that's gonna get my ass kicked. 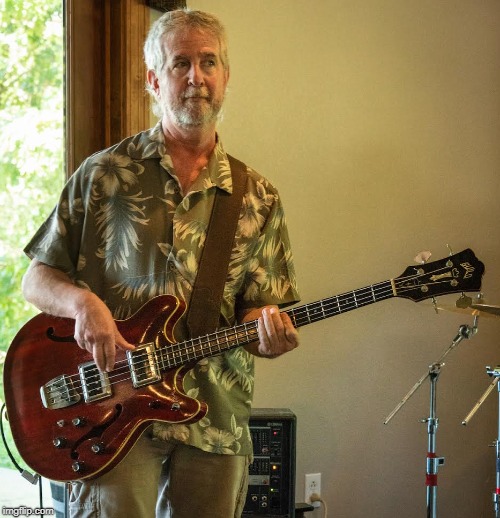 George - "Naked?" Yeah...the cool aid was spiked and they were having a good time. Not my sort of thing but nobody minded.